Roka Aldwych is the most recently opened, and largest Roka restaurant, seating 150. They opened their Charlotte street site in 2004, and also have restaurants in Canary Wharf and Mayfair. They specialise in modern Japanese cuisine and they centre around a robata grill.

I love Japanese food, but it can be tricky to find first class sushi, even in London, compared to places like L.A where quality selections are found on almost every street. When an email from Bookatable popped into my inbox for an amazing deal at Roka Aldwych, we couldn’t resist.

Three courses plus a glass of bubbles for £31 per person and their current rating on TripAdvisor is 275 out of 16,865 restaurants in London. Awesome!

On arrival, our coats were taken and we took our places at the bar for a quick drink before we sat down to scoff. I went for their gin based cocktail, a Roka Negroni; rose petal gin, Campari, ume shu & peach bitters. It was served in a wide tumbler with a large globe of ice and went down very well (and very quickly!). We were also given some bar snacks to nibble on which were moreish– I cannot tell you what these were I’m afraid, but they were crispy, salty and sweet!

The bar is a very relaxed area. The décor is dark, but areas are well lit giving it an intimate, comfortable atmosphere. The staff are attentive and polite, but not in your face or stuffy.

When we were ready, we were led through to the restaurant and seated opposite the robata grill. The décor flowed between the two areas, but the restaurant felt more intimate with the glow from the grill in the middle of the room. I don’t know about you, but sometimes when you are seated on a table for two, that it can be quite tight for room and the tables can be placed closely together. These tables felt larger, making you feel more relaxed and also giving enough space in between other diners, all adding to the intimacy.

On seeing the set menu, we decided to upgrade to the £41 option (still a TOTAL bargain in my opinion!) as we both fancied the black cod for mains. We also elected to have the glass of bubbles with our dessert, as we (I) had over eagerly ordered a glass of Chilean Sav Blanc at the bar! Our waiter was more than happy to accommodate and was relaxed and friendly with us.

Our starters were a mix of sharing plates; baby spinach leaves with sesame dressing, black cod, crab and crayfish dumplings, chef’s sashimi selection and fresh water eel tempura with avocado and shiso. Our waiter told us that the dishes would be bought to us as they were ready.

Within minutes, the centrepiece of sashimi was delivered to our table. We were both blown away! Perfectly laid on top of an ice filled bowl and green garnish were portions of colourful, fresh sashimi. Again, I apologise as I don’t remember all of the fish (bad, bad, lazy reviewer!) but there was blue fin, salmon, prawn and two other fishies! Hands down, I think this is the best sashimi I’ve had. It was so fresh and flavoursome, I honestly would have been happy if that was all we had for £41! 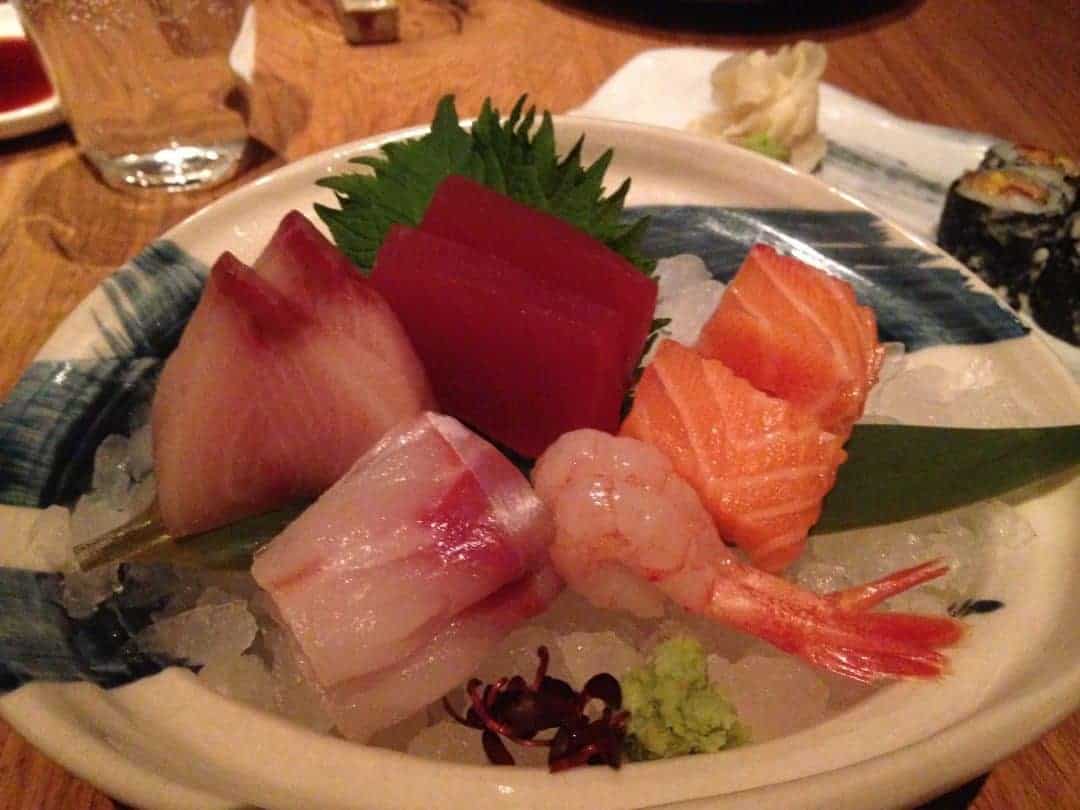 The eel tempura was warm and crispy and we both found the dressing on the baby spinach leaves addictive. The husband’s favourite starter were the dumplings – these were top notch, filled to the brim with yummy seafood goodness, but for me, nothing can quite beat the simplicity of perfect sashimi. 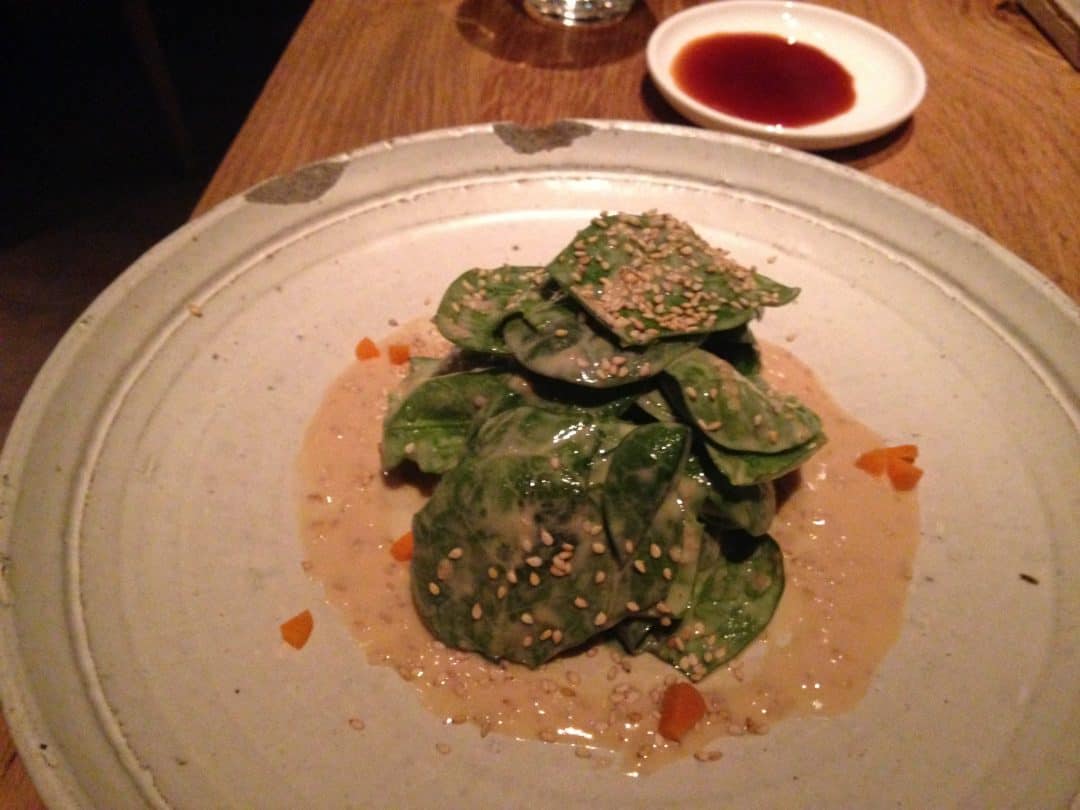 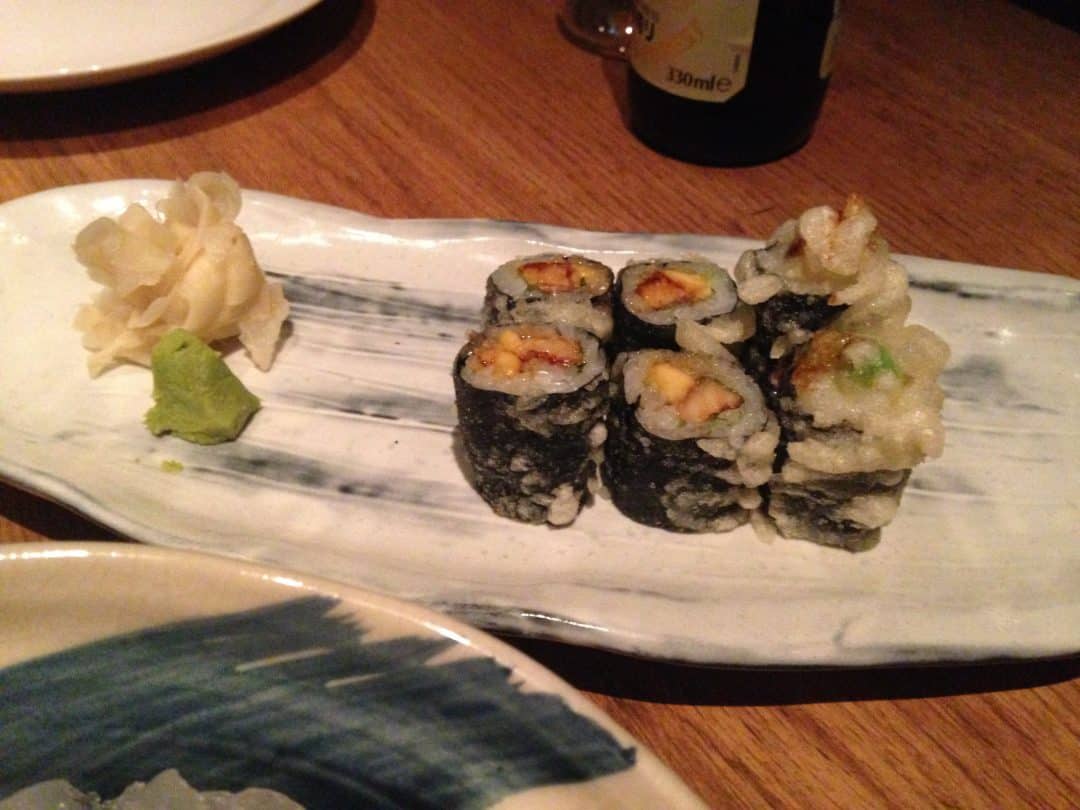 For main course, we had a choice of black cod marinated in yuzu miso, teriyaki bison sirloin with robata grilled eggplant and myoga or lamb cutlets with Korean spices. As soon as we laid eyes on the menu we both wanted to go for the black cod, having had a previous recommendation from a friend about the Nobu Black Cod. Usually we would go for two different main courses so we can have as much taste experience as possible, but neither of us was budging on the cod! And oh, wow, we were not disappointed – even when looking over to other tables’ orders! 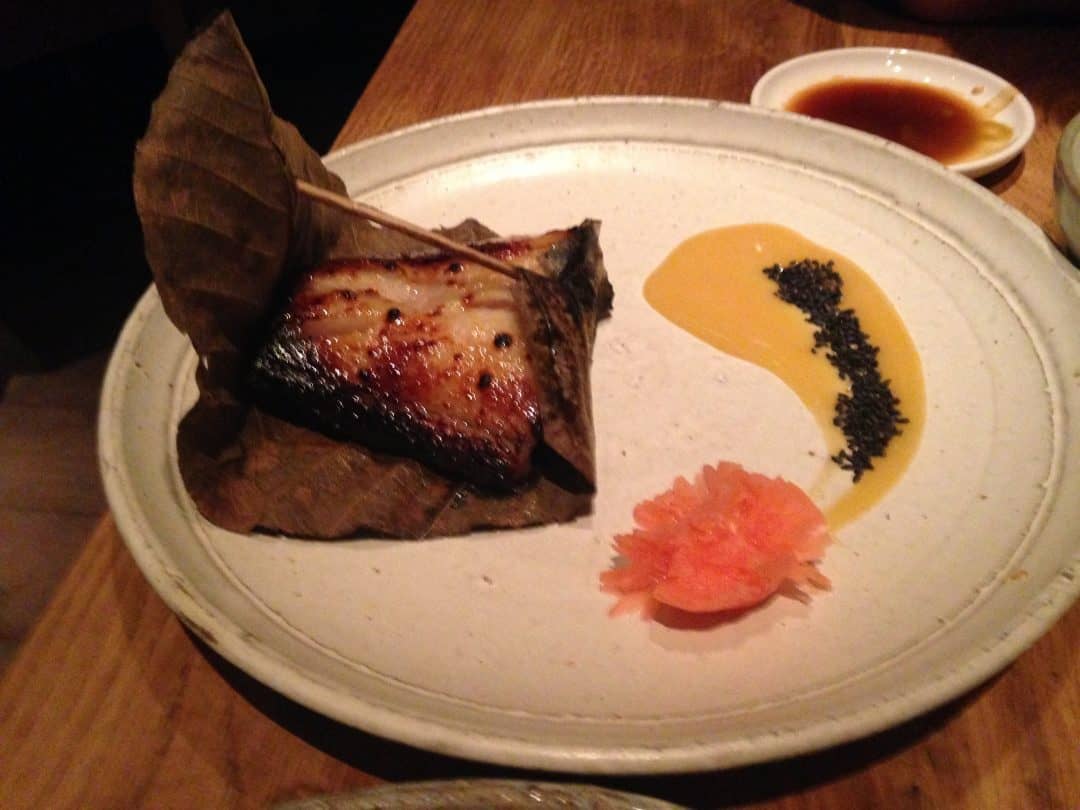 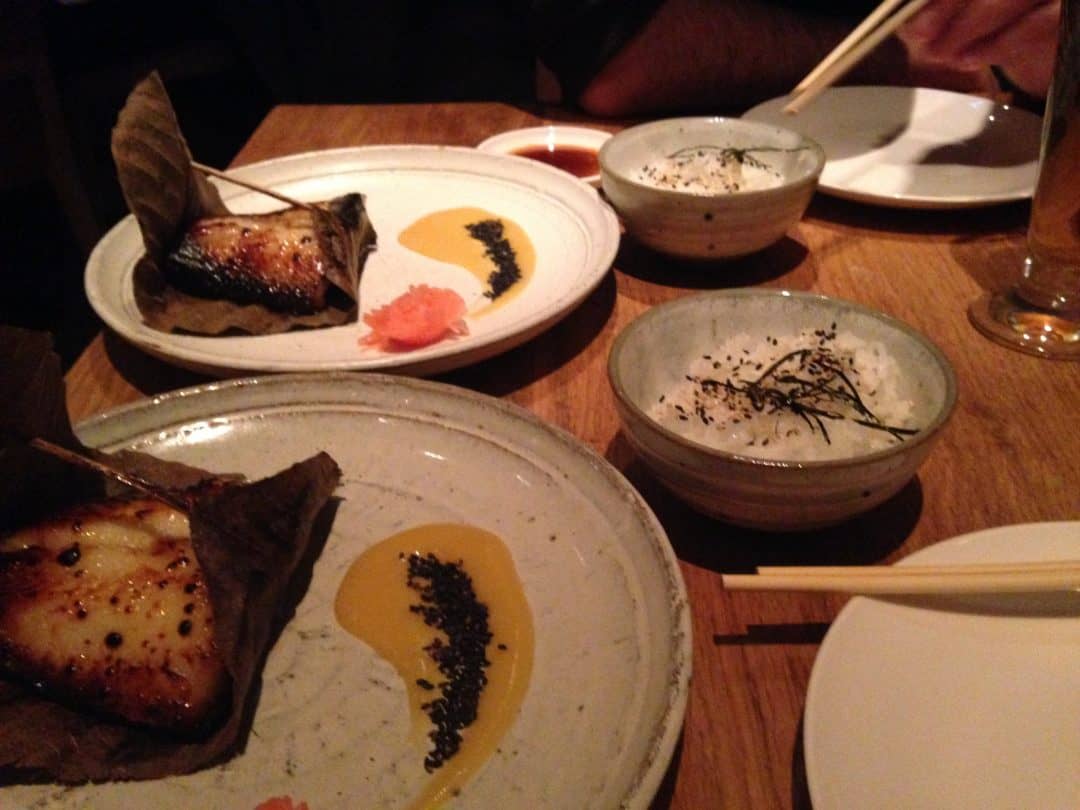 Black Cod, I have found out (thanks Google!), is in fact not a cod and quite a fatty fish (good fats mind you!) meaning it is succulent, buttery and holds on to the delicious miso marinade. The skin is charred giving it a beautiful bitter sweet taste and the presentation is divine, served in a (banana?!) leaf with rich fruity sauce on the side which taste combines perfectly. The cod is served with a small bowl of sticky rice. Every mouthful was superb and we scraped our plates clean. Each bite of fish was tender, juicy and full of flavour, not subtle at all, which you may usually expect from a fish main.

We are both fairly proficient with chopsticks, however devouring the fish with them was quite tricky as it is pretty flakey. I’m sure if we had asked for a fork, there would have been no issues, and being an authentic Japanese I really would not expect forks on the table! It did actually make us eat slower and taste every mouthful, so do persevere if you can!

For dessert, we had a choice of about 5 different desserts, and unfortunately this is where the menu fell down slightly for me, however, I would like to stress this is just because of personal taste! One food I just can’t abide is banana, just nope, nope, nope! Two of the desserts had banana in, so they were out straight away. There was a dark chocolate and green tea pudding that I was really tempted by, but I was quite full at this point so didn’t want anything too heavy. So in the end I chose the one I wasn’t quite sure what it was, I just knew it came with satsuma ice cream! Husband had a peanut, vanilla and chocolate sundae with sesame poki sticks and banana tempura. 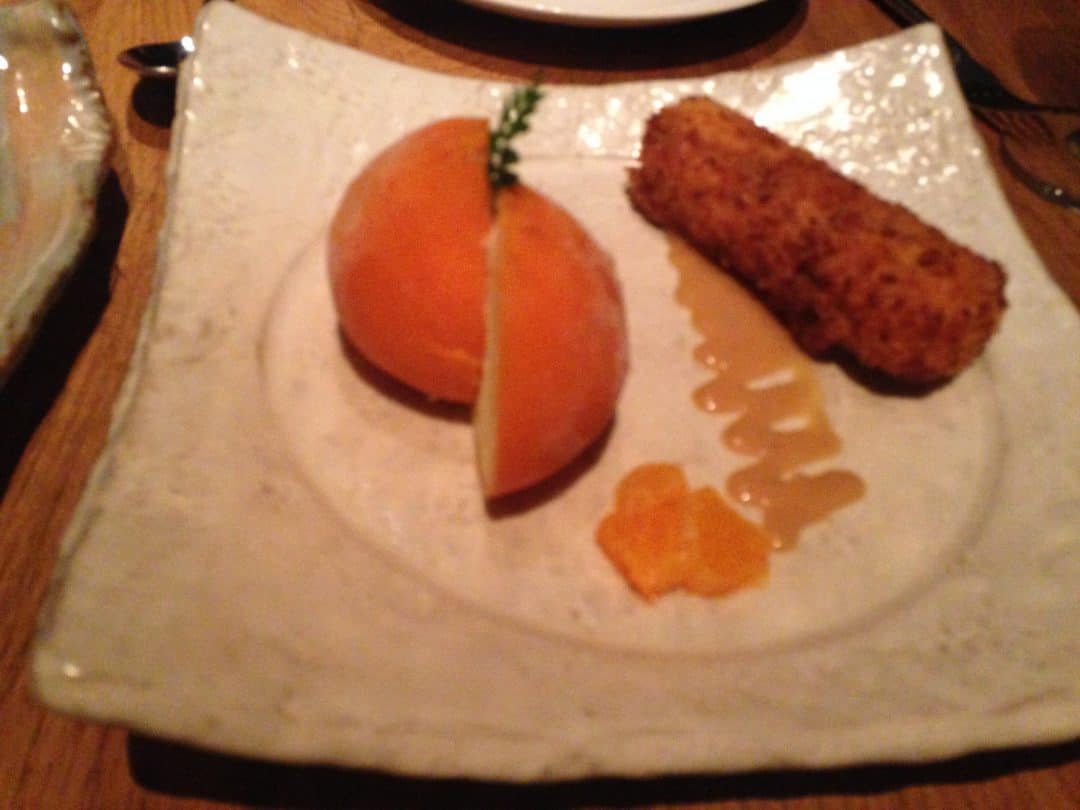 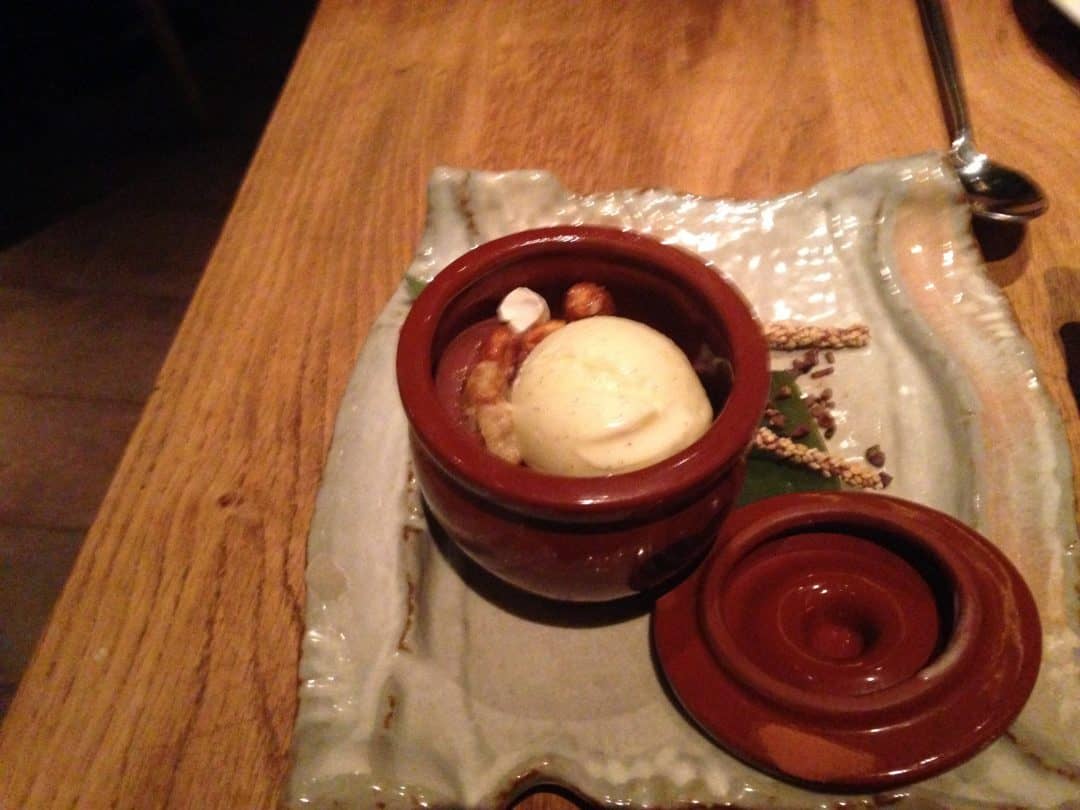 My dessert arrived, and it was fine, for me the satsuma ice cream didn’t quite hit the spot, although it was beautifully presented, it was served alongside a kind of crispy custard bar, soft and creamy on the inside and crispy on the outside – this was really nice. I obviously stuck my spoon into the other dessert on the table a few times (avoiding the banana!) and the chocolate was perfect, creamy and indulgent. Our bubbles that were included in the offer were really great, not to sweet, not to dry and just a subtle fizz.

The whole experience at Roka Aldwych was delightful, it was very relaxed and we felt well looked after by all of the friendly staff. When we were leaving, we did notice that nearly every other diner was in a suit and tie and there were lots of business dinners going on around us, totally understandable being just next to Fleet Street and The Strand, however, we did not feel out of place at all. We walked back to the tube, satisfied and with full belly’s!

We would definitely go back on another occasion, but maybe let ourselves loose on the full menu, rather than the set – maybe I will just eat all the sashimi that is on offer!

The bill for two of us came to £135 including service, for included two set menus at £41 (including a glass of bubbles), a cocktail, 3 beers and 3 glasses of delicious Sav Blanc. Roka Restaurants