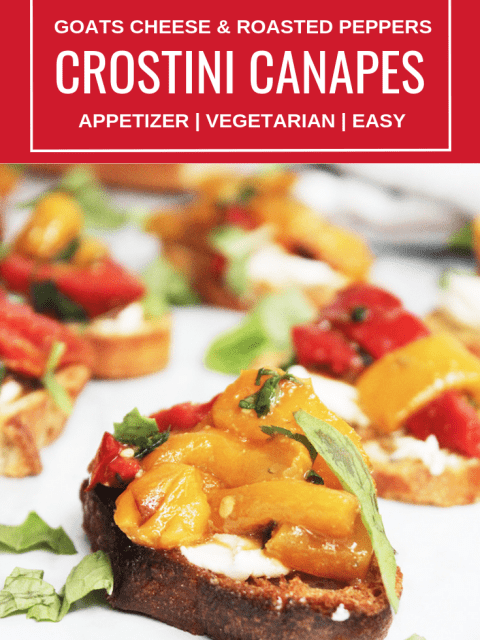 These vegetarian Crostini Canapes are topped with goats cheese and roasted and marinated bell peppers. This easy appetizer is a great tasty option for entertaining a crowd. The different components can be made ahead of time for a fuss free savory snack. 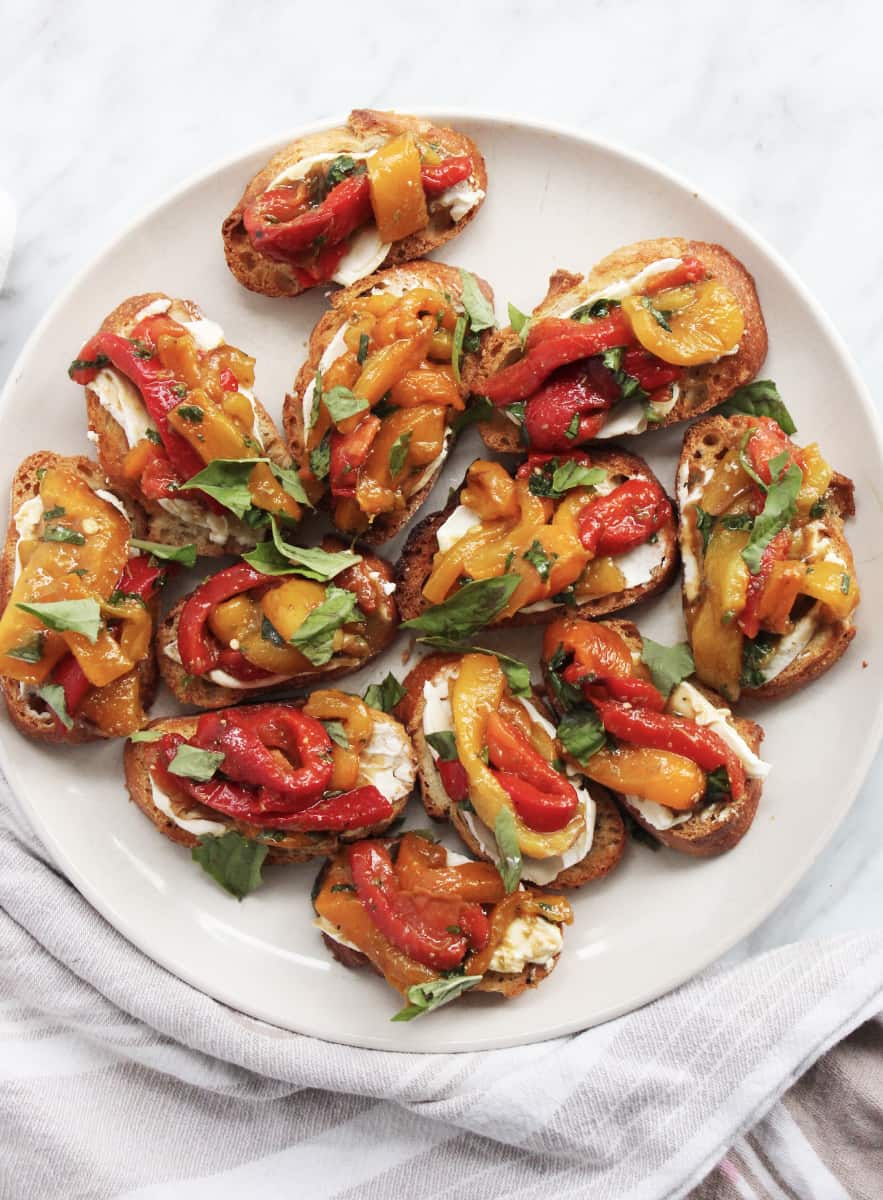 So the polar vortex has come and gone, crazily I thought spring was just around the corner....ha!  Right now the snow is coming down, it's pretty as I watch it fall from the heat of our condo with a kitten crawling over me but I feel I haven't spent more than 10 minutes outside for quite a while!! We had two days of ice storms earlier this week, I'm so happy right now that we live in the centre of the city so everything is right on our door step!!

I did venture out quickly to pick up the ingredients for these tasty treats!  If you are looking for a quick savory snack that you can throw together for easy entertaining, these Crostini Canapés are for you!

The awesome thing about these crostini, is that everything can be made ahead of time and then just assembled before guests arrive. The peppers can be roasted and marinated, and sit in the fridge for a couple of hours, and the baguette can be sliced, toasted and will keep for a couple of days in a cupboard.  You can then spread the goats cheese and top with the red peppers around 20 minutes before your guests arrive.  You don't want to assemble them too early or they'll get soggy! Bleurgh! 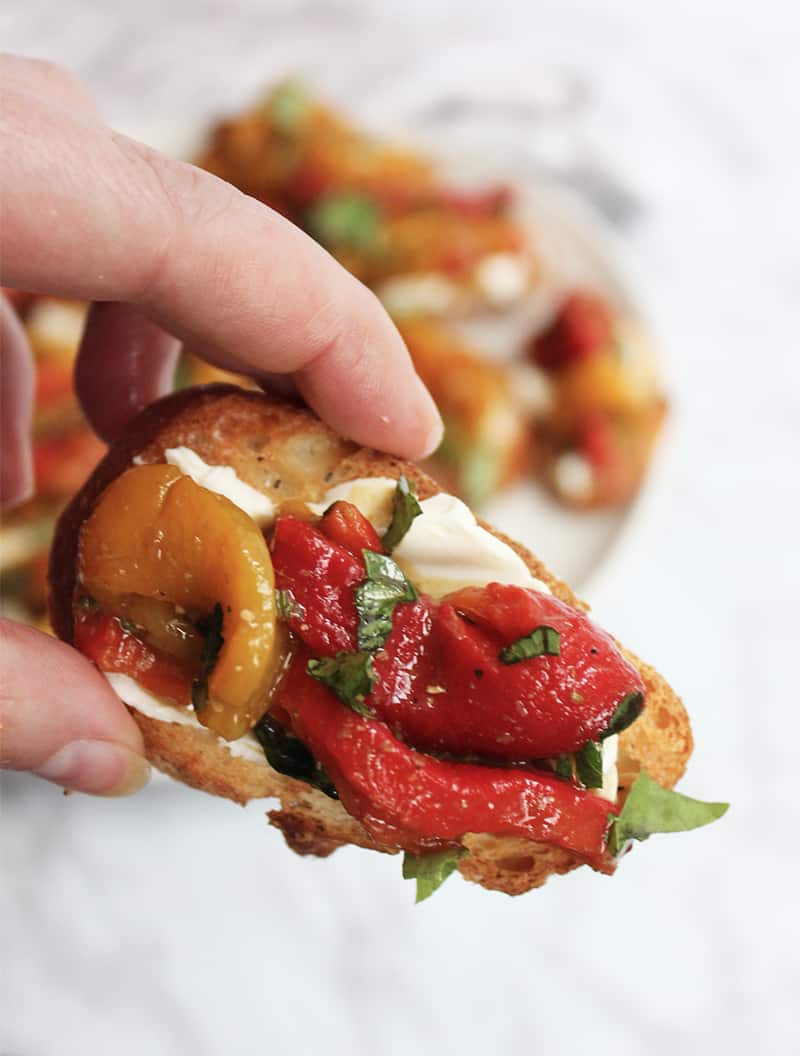 The difference between Crostini and Bruschetta

When I was developing this recipe, it was going to be a Bruschetta Canapé, but after a little time with Google I came to the conclusion that this appetizer is indeed a crostini.  Crostini's are smaller and are rarely served without a topping.  Translated as 'little toasts', they are made from thin slices of bread such as a baguette and toasted with olive oil.  Bruschetta on the other hand, is made using thicker slices of bread, like sourdough, and then grilled.  Traditionally bruschetta is simply rubbed with garlic for serving.  So now you know!

For this recipe, I roasted fresh peppers, but if you are in a hurry, you can used the jarred roasted peppers as they are generally of a really good quality. Simply slice them and use the oil they come into to marinade them with the other ingredients.

If you can't get hold of spreadable goats cheese (or are one of those people that don't like it), you can swap this out for s soft cream cheese like Philadelphia. It won't have the bite of the goats cheese, but you won't lose any of that creaminess. 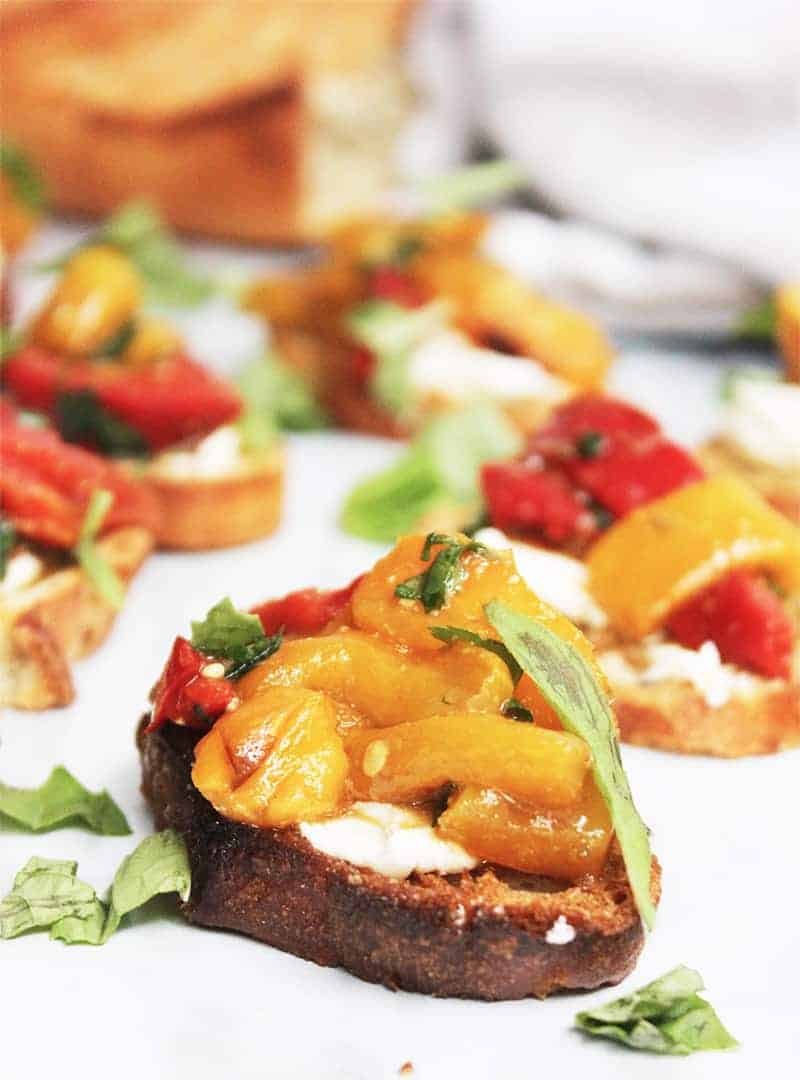 If you are looking for more quick savory snacks and easy party appetizers, be sure to check out my Puff Pastry Pinwheels with Bacon & Cheese and Parmesan Crisps with Goats Cheese & Asparagus 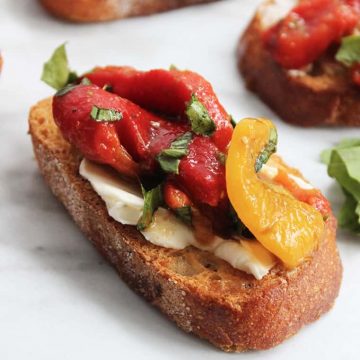 Nutritional value based on 1 of 18 servings