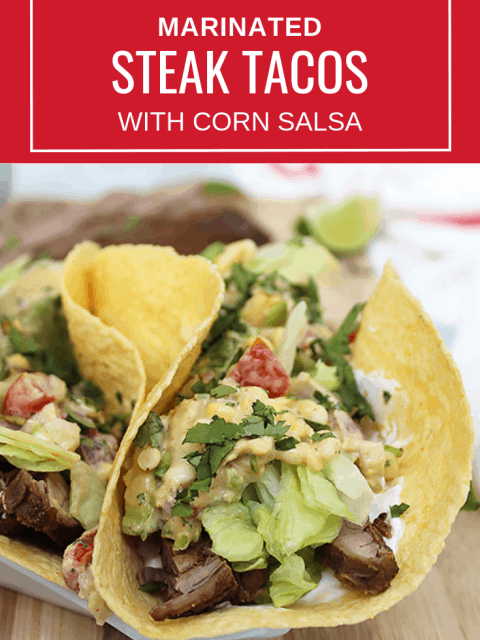 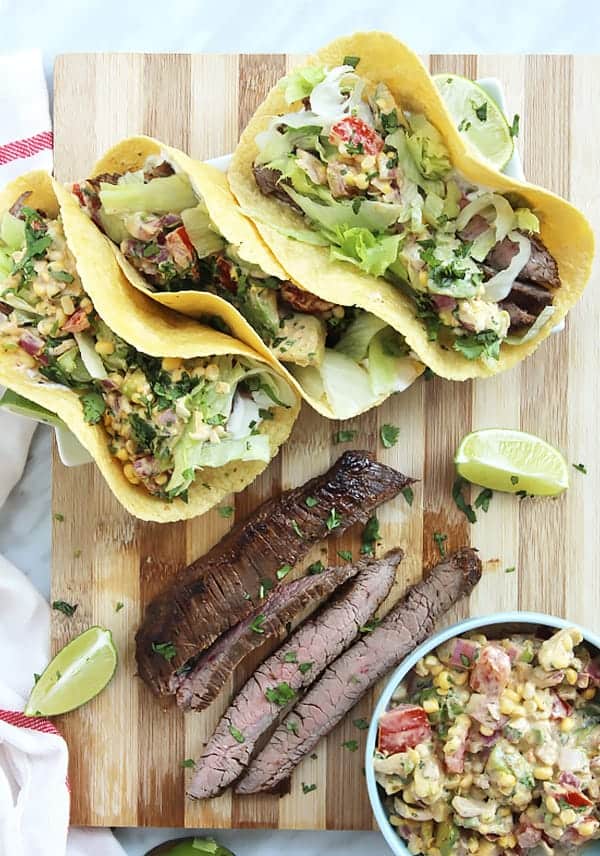 A little info about me; I am a damn good sleeper.  I have no issues falling asleep and fairly rarely wake up during the night, I see it as a special skill and something I am immensely proud of! But, every couple of months I wake up dead early, like 4am.  I have a theory it's because I've gone over my allotted sleep hours in the weeks before. So here I am, at 4am, watching the sunrise and writing about tacos, and getting hungrier by the second!

It's been a little while since my last taco recipe, in fact just shy of three years! They are still a super popular recipe, seriously, check them out, they are AWESOME!

These flank steak tacos are super flavorful and dead easy to make.  The steak is perfectly tender and they are topped off with my yummy Corn Salsa. Mr Slow The Cook Down couldn't get enough of them, I can't wait to hear what you all think of them next Taco Tuesday! 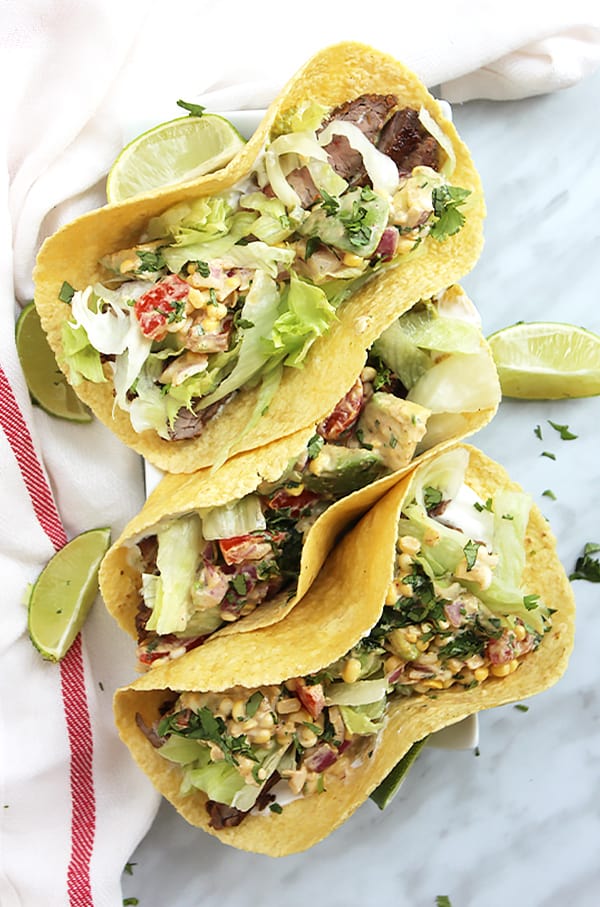 How to make Flank Steak Tacos

First up you need to marinate that steak, simply pop all of the marinade ingredients into a large bowl (preferably glass) and give it a mix. Add the steak and cover. Pop it in the fridge for at least four hours, and up to twelve.

Bring the steak out for about half an hour before you cook it so it comes up to room temperature.

To cook in a skillet, add a little oil and place on the highest heat, once it's super hot, add the steak and cook for about four minutes on each side until it's nice and brown. Remove from the heat, cover the steak with foil and let it sit for at least 15 minutes.  Thinly slice it. 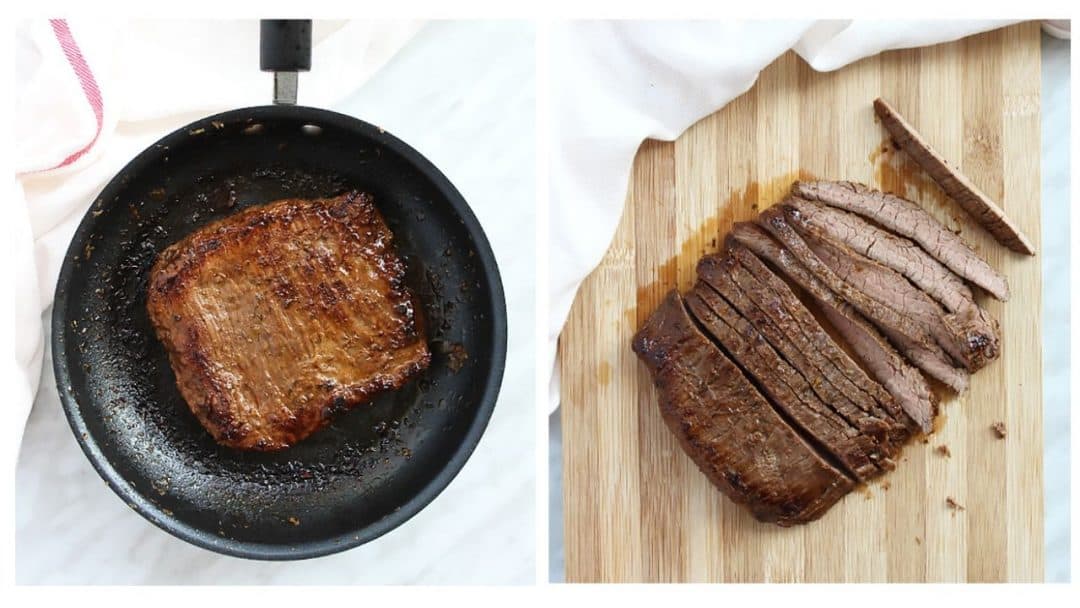 Then build your tacos!  A layer of sour cream and guac, top with three slices of steak, some shredded lettuce and a good helping of corn salsa.  Serve! 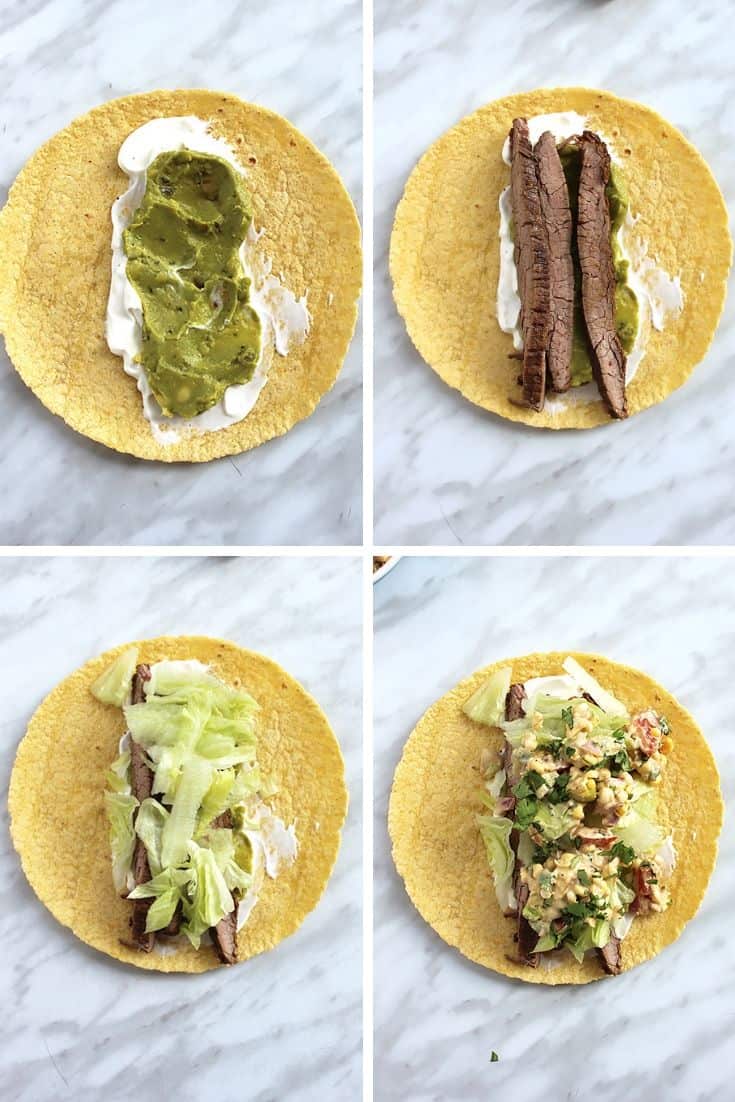 This is a great recipe to cook on a grill this summer - simply cook the steak on a super hot grill. Tacos are a traditional street food so they are perfect to handout at your summer barbecues. Grilling will add a real smoky flavor to the steak for maximum yum enjoyment.

Flank (and skirt) steak are pretty tough cuts of meat, so the marinade is essential. The orange juice in the marinade not only adds a tang to the meat, but the acid in it also helps to break down the tissue so you have a juicy and tender piece of steak.

Do not skimp on marinading time - the longer you leave it the better it will be, and be sure to rest it before serving too. 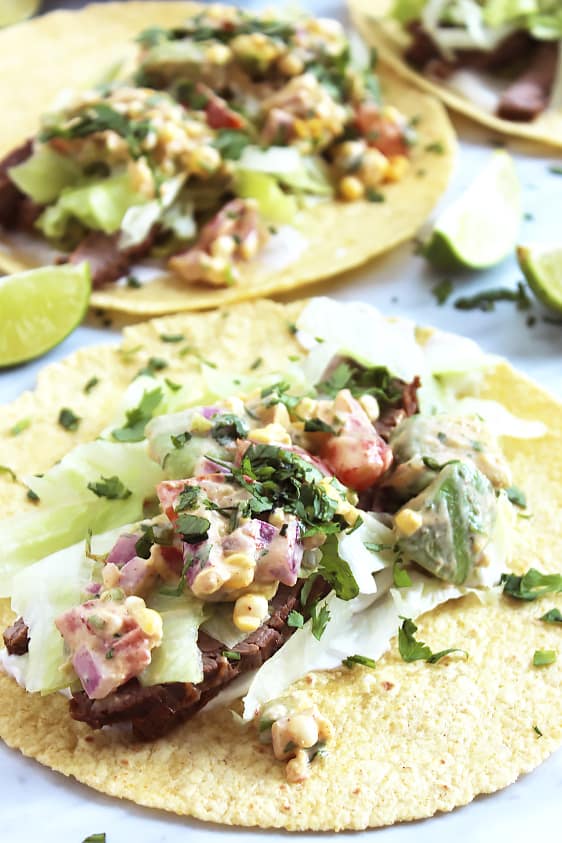 What is carne asada?

Carne Asada originates from Mexico and means 'grilled meat' or 'roast meat'. It is a piece of thin beef that has been marinated and then quickly grilled and sliced into thin strips.  It can be served on it's own as a main course or as a filling for burritos, fajitas or, of course, tacos.

What cut of beef is carne asada made from?

Carne Asada is usually made from either the skirt or the flank (and this recipe can be used with both cuts). They are thinner cuts that are quite tough (hence the importance of the marinade) but super flavorful.  Good news for your pocket too as they are also cheaper cuts of beef.

How to cook carne asada in a skillet

Ideally, you want to be outside grilling your steak to get that added smokiness and those stunning grill lines, but for those of us living in a condo this just isn't possible  - who would have thought a barbecue on a balcony in a condo complex would be a fire hazard?! Luckily though, you can easily cook this in a skillet like me - just add a little oil and get the pan super hot so that it sears and you get a good color and three to four minutes on each side and you are good to go. 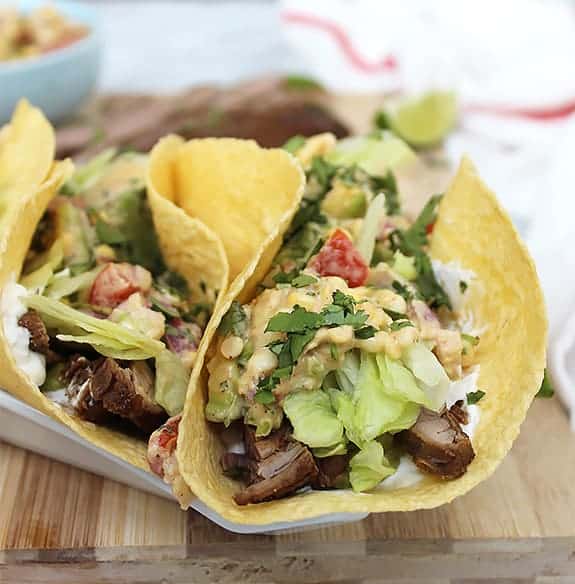 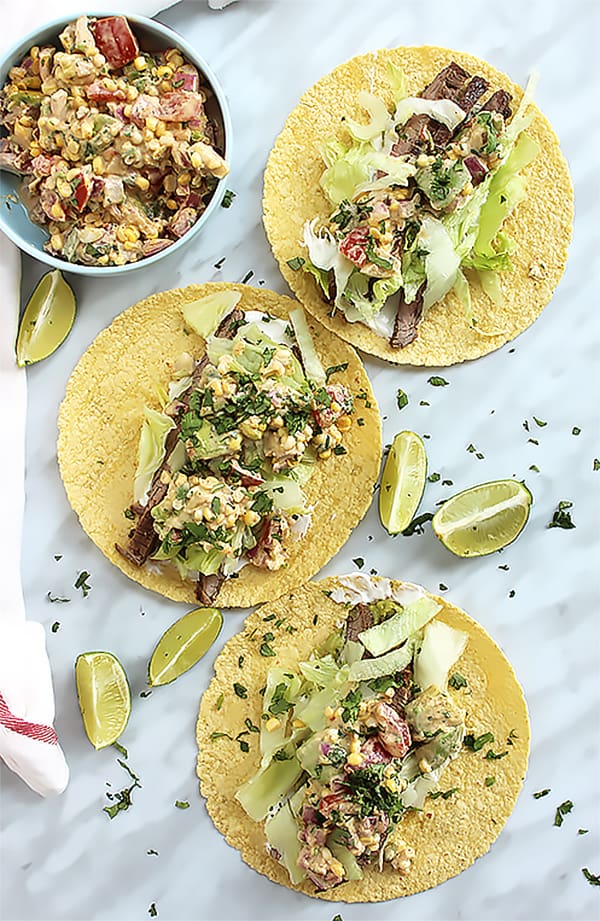 Be sure to check out these other tasty Mexican inspired beef recipes!

I love hearing from you!! If you have tried these yummy tacos, be sure to scroll down, give it a star rating and let me know what you thought! 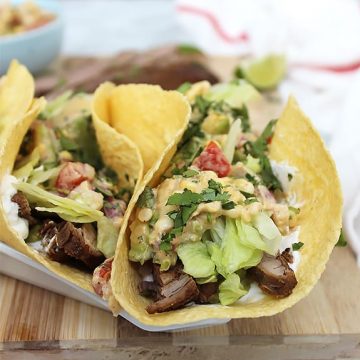 For the marinaded flank steak

To build the tacos

To marinade the steak

To cook the steak

The steak can also be grilled for a smokey flavor. Marinade the steak for at least four hours, if not longer. Slice the steak against the grain. Nutritional values are based on one of six tacos.